via arstechnica.com, a Federal judge commenting on Righthaven's copyright trolling 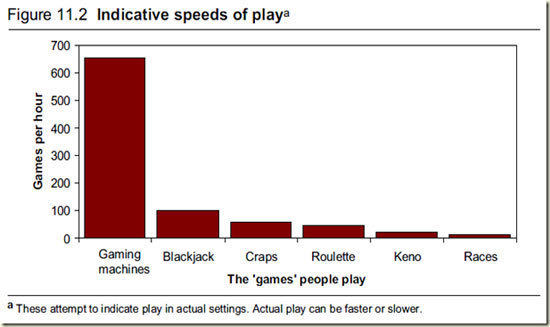 It’s all about speed.

You want to spend money, and you want to spend it quick (and let me tell you that is what the owners of casinos and clubs want you to do)? Then sit yourself down and start feeding in the notes – no need to worry about some human changing the money for casino chips and then dealing out cards – just press that button as fast as you can. 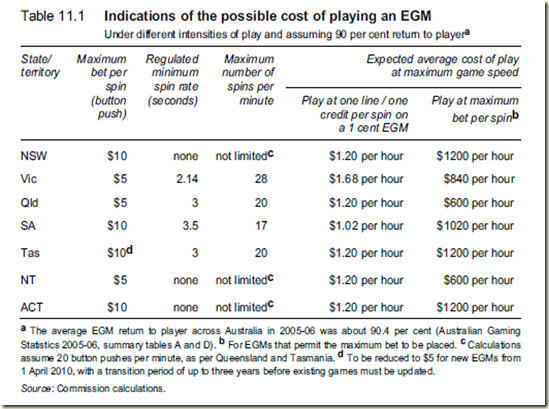 [As a blackjack dealer] I certainly saw people lose $1,200 in an hour – but not at the seemingly low value $10 a hand. In fact $10 black jack tables are about the cheapest you can get nowadays – the casino makes up for the lack of speed by increasing the minimum bet. To lose $1,200 in an hour on blackjack would have meant you doing some serious punting – probably $25 a hand at minimum. 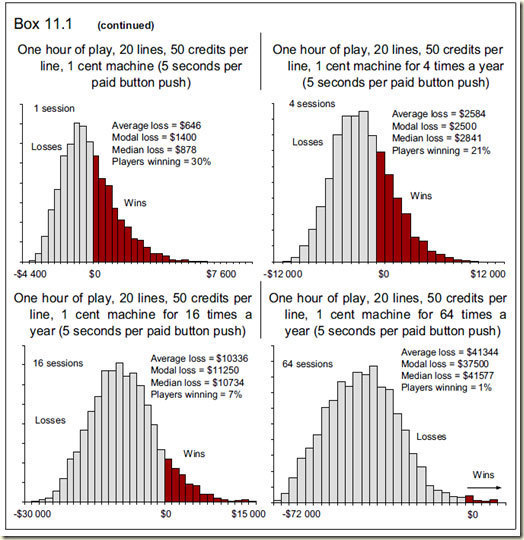 [Australia's] Productivity Commission also nicely shows the adage that the House always gets you in the end is true. As you can see in the upper left graph, 30 per cent of players can win if they just play the pokies one session of one hour. That sounds about right – a group of 10 friends playing the pokies – three winning, the rest losing seems about right. Come back four times though and that winning per cent is down to 21 per cent. Sixteen times – and only 7 per cent. Sixty four times – and yes, we may well be talking problem gamblers here – and the winning percentage is 1 per cent.

... we sent Anderson an email along with a handful of YouTube links — demonstrations not only of great rap lyricism, but also illustrations of the gulf between written word and flow. The next day, we chatted online about what he heard.

The upper 1 percent of Americans are now taking in nearly a quarter of the nation’s income every year. In terms of wealth rather than income, the top 1 percent control 40 percent.

In the world of propositional calculus, there's absolutely no difference between a rule about traveling to Boston by plane and a rule about eating vegetables to get dessert. But in our brains, there's an enormous difference: the first is a arbitrary rule about the world, and the second is a rule of social exchange. It's of the form "If you take Benefit B, you must first satisfy Requirement R."

Our brains are optimized to detect cheaters in a social exchange.

With the advent of quantum theory over the past 100 years, scientists have been able to develop an elegant mathematical framework capable of uniting three of the four fundamental forces that are thought to exist in the universe. The fourth, gravity, still remains the fly in the ointment, and has resisted unification to this point. Early last year, Dutch theoretical physicist Erik Verlinde published a manuscript to the arXiv that purports to explain why science cannot reconcile all four fundamental forces. According to him, it is simple: "gravity doesn’t exist."

Social media have given photojournalists a million extra eyes in conflict zones. But if a picture can say a thousand words, the trick is finding the right one.

The real test for working photojournalists is to reconcile the technical realities of the new media landscape with the aesthetic and ethical requirements of practical journalism. "Never has there been a time when you needed a professional class of journalists more than right now," Naughton said. "There's a real resurgence in formal and aesthetic qualities in contemporary journalism, the idea of aesthetics and photographers as storytellers, not just people who are be able to break the news."

via theatlantic.com
Browse the Archive »